What we make has been making industries better since 1865.

The history of Marsh Bellofram provides a look into the history of American manufacturing in the 20th century, and how it adapted to prepare for the needs and challenges of the 21st and beyond. It’s a story of smaller companies coming together to combine strengths, vertically integrate where it made sense, be strategic in their growth, and better serve a similar customer base.

Products are organized and sold under fully dedicated divisions, each staffed with an experienced and highly trained team of dedicated technical sales, applications engineering and customer service support personnel.

Marsh and Bellofram were sister companies of the Desco Corporation. They were combined into Marsh Bellofram in January 1995.

Prior to that, Bellofram was originally established in the Boston, Massachusetts, area in 1953 to manufacture elastomeric rolling diaphragms. John Taplin, the founder and original owner of Bellofram, designed air cylinders, air regulators, gauge protectors (diaphragm seals), and other pneumatic and hydraulic devices using his diaphragms. In the early 1980s, Rexnord purchased Bellofram, and then in 1986 sold Bellofram to the Desco Corporation of Columbus, Ohio.

Desco moved Bellofram from its plants in Pelham, New Hampshire, and Burlington, Massachusetts, to the Newell, West Virginia, facility designed, constructed and fully integrated specifically for the high-volume, highprecision manufacture of elastomer products.

Meanwhile, Marsh Instrument Company was originally established in 1865 in Skokie, Illinois, as the James P. Marsh Company. Marsh was acquired in 1988 by Desco and relocated to Hastings, Nebraska, to share operations with Desco’s Marshalltown Instruments. Marshalltown had been founded in 1918 in Marshalltown, Iowa.v

Since Marsh Bellofram became one entity in the 1990s, it has continued to grow with strategic acquisitions that play to its core strengths of process, automation, measurement, and control. It is built for continued growth through the highest product quality standards, critical manufacturing capabilities, innovative engineering, and an unparalleled dedication to customer service and support. 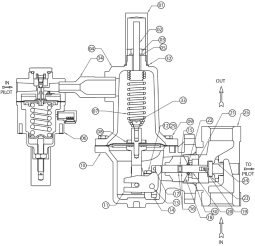 Marsh Bellofram is a world class instrumentation manufacturer, with powerful product support, and near flawless distribution. Our mission is to engage the current and future needs of our customers with swift, professional service while providing the highest quality instrumentation products at the most competitive prices.

Manufactures highly rugged timers, counters, and PID (proportional–integral–derivative) controllers that are engineered to provide accurate and repeatable timing and monitoring operations in all types of industrial environments, including on the factory floor and in many OEM applications.

BelGAS is a global leader and originator in the design and manufacture of high-and low-pressure regulator products. Forty years of proven market experience set the standard for excellence.

Inventor of the original rolling diaphragm and a leader in anti-friction seals. Maker of diaphragms with precisely engineered tolerances for premium performance and long-lasting durability in critical applications.

Silicone is at the heart of performance. This industry leader manufactures sponge and solid rubber in a variety of shapes and sizes, partnering with product designers to transform silicone into custom engineering solutions.

Known for industry-standard choke assemblies, with a reputation built on engineering and hands-on design experience that has set the standard for decades.

The standard of accuracy since 1865, Marsh Instruments manufactures rugged, high-quality precision pressure gauges, thermometers, and accessories used in countless applications where accuracy, dependability, and adaptability to application environments are essential.

Marsh Medical revolutionizes building a parts portfolio for medical devices and equipment. Just one call procures every part you need, all from a single point of contact.

ServoTek Products is an AS9100 and ISO9001 certified leading designer and manufacturer of TachSyn brushless DC tachometer and commutators, instrument-grade DC tachometers, and low-cost rotary encoders.

An innovator in temperature sensors, firsts include the exclusive knife-edge design of the Tube-Temp thermocouple, the industry’s most accurate measurement device for fired heater and industrial boiler tubes.